The Ecospheres Project is a trans-Atlantic research and media collaboration whose principal participants are Dr. Laurance Doyle (USA) and Dr. Martin Heath (UK).

This site outlines our research interests, our work as consultants and our public outreach activities, which include lobbying for responsible stewardship of our home planet.

Our core concern is what it takes to make a planet habitable, with a  focus on the requirements for high biomass – high biodiversity ecosystems such as Earth.s forests.

“It could be that the first detection of extra-terrestrial life will be forests” – statement by Laurance Doyle, May 8, 2013.

Below: May 8, 2013, Dr. Laurance Doyle (representing the SETI Institute) outlined the state-of-the-art in the hunt for Earth-like planets to a congressional hearing.

Promoting the public understanding of science.

Research carried out by the Ecospheres collaborators was dramatised in the Big Wave TV production “Alien Worlds” (the U.S. version was called: “Extraterrestrial”). The two part mini-series looked at two possible worlds which had emerged from the published research. Martin Heath and Laurance Doyle served in the roles of consultants and participants. 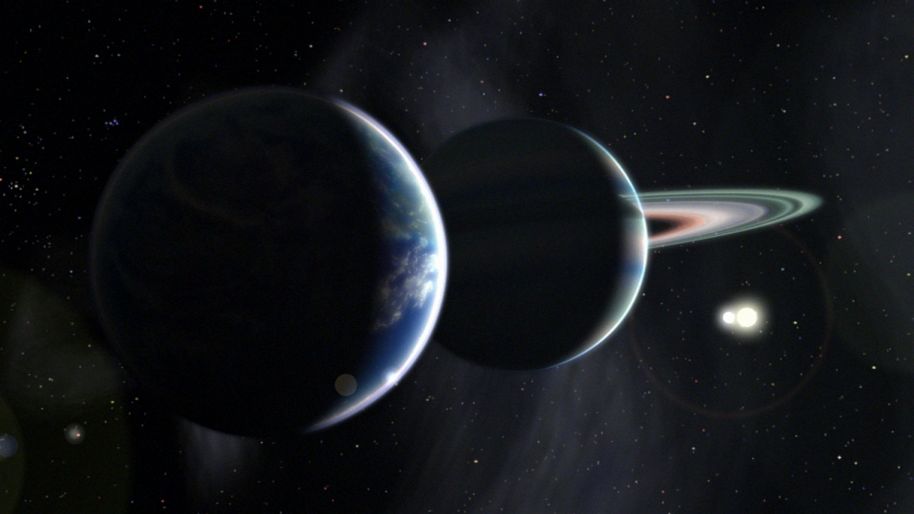 The Blue Moon (above left) was envisaged as an Earth-sized moon of a gas giant planet with a spectacular ring system. This huge planet, in turn, orbited in the Habitable Zone around a binary star consisting of a couple of stars like our Sun. This habitable world was devised for “Alien Worlds” by Martin Heath and brought to life by a CGI team. Image used with permission of Big Wave.

Or the full documentary can be found on Youtube: Part 1 – Aurelia  & Part 2 –  Blue Moon

The programmes were used by schools to encourage interest in science and  also formed the basis of an exhibition staged by the Science Museum in London, which toured internationally.

Let’s not forget the Earth – the life on our own doorstep comes first!

Above: The Earth’s great tropical forests appear as swathes of dark green in this distant view of our world taken by the NASA/NOAA DSCOVR satellite on Jan. 2, 2016.

Martin Heath is a life-long campaigner for the protection and enhancement of ecological corridors across the landscape. He has emphasised that while the effort to discover new worlds, often tens or even hundreds of light years away is exciting:

“Everyone’s first and most urgent priority is the planet on which we actually live, the world we discover just beyond our doorstep.  It’s vital to encourage a deeper understanding among both public and politicians of the key role to be played scientific research in safeguarding human communities. We do not need further research to confirm that human activity is creating a major crisis for the natural world, but effective research programmes will be essential to monitor the rates and magnitude of global change and in preparing human communities to respond most effectively to environmental change. The fundamental dilemma of our civilisation is that so many of the processes that sustain it are, at the same time, undermining the natural life support systems upon which the lives and well-being of billions of people depend.”

These concerns are a major focus of our Prime Meridian newsletter, which looks at global environmental issues alongside the cycle of the seasons in SE England.

Martin Heath speaking up for life on Earth. Standing beside an ecology area which he created, he is explaining thee necessity of stewardship of the Earth’s natural life support systems (April 2011).