Above: The dome of the 36” Crossley reflector sits perched on Ptolemy Ridge, a wooded spur of Mount Hamilton, in the California Coast Ranges, overlooking a fog-shrouded San Joachim Valley in this early morning photograph. The Crossley telescope has been used by author Laurance Doyle and co-workers to set useful constraints on the possible radii and orbits of planets orbiting the red dwarf binary CM Draconis. This was the first observation programme capable in principle of detecting objects as small as 2.5 Earth radii. The 36” Crossley telescope was shipped over from England in the late 19th Century. Facilities for astronomers using the telescope are rough and ready. Inside the dome observers are obliged to mount a precarious platform, but the antique instrument was more than equal to the photometric studies required for useful studies of the environment of CM Draconis. 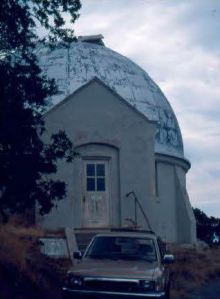 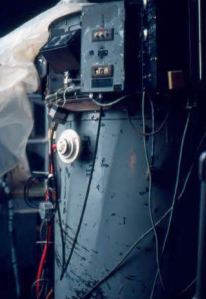 Right: The upper section of the venerable, but serviceable instrument, with its protective polythene sheet folded back.

The possibility of a giant planet orbiting CM Draconis has been mooted, but it remains to be confirmed. Doyle was a participant in the study reported by Deeg et al. (2000), which described how periodic deviations of eclipse minima, observed with high precision in the period 1994 to 1999, could indicate presence of a third orbiting body. Individual measurements of 41 eclipse minimum times yielded a standard deviation from a linear ephemeris of 5.74 seconds, with a periodicity of 750 to 1,050 days. It would be compatible with a circum-binary planet of 1.5 to 3.0 Jupiter masses at an orbital distance of 1.1 to 1.45 AU to the binary barycentre. Deeg et al. (2000, p. 1) were cautious: “The assignation of a planet to the CM Dra system can however only be upheld if this periodicity can be followed in future observations for several years. For low-mass eclipsing binary stars, the method of eclipse minimum timing allows one to reach mass limits for the detection of third bodies well below that feasible by radial velocity measurements.” Doyle et al. (2000) analysed a light curve of CM Drac with a coverage of 1,014 hours and 26,043 individual data points and a photometric precision of 0.2 to 0.7 %, to investigate whether it contained evidence for the transits of planets of ≥ 2.5 RÅ, RÅ, with periods of ≤ 60 days. The Transit Detection Algorithm compared 4 x 108 model light curves with observations and enabled quantification of detection probabilities and false alarm rates.

The detection probabilities of planets of various radii are a product of the photometric noiselimited precision and the observational coverage of planet candidates contained within the TEP light curve of CM Drac for the observational years 1994 through 1998. Doyle et al. (2000).

Right: Representation of Neptune-sized body transiting across the face of a star in a CM Draconis-type system.

Planets significantly larger than 3.0 RÅ would have constituted “supra-noise“ detections, and for periods of ≤ 60 days they would have been detected with a probability of 90%. “Subnoise” detections of smaller planets were more constrained; 2.5 RÅ planets with periods of ≤ 10 days would have been detected with an 80% probability. They concluded that the photometric transit method was a viable way to search for relatively small, inner extrasolar planets with moderate-sized telescopes using CCD photometry with a matching-filter analysis.

The discovery of a Jupiter-like body in the CM Draconis system would be significant, in itself, and planets discovered so far in other systems are mostly unequivocal giants with masses a few times larger or smaller than Jupiter Xenobiologists have exercised their imaginative talents on the challenge of devising viable organisms and ecosystems capable of surviving in the atmospheres of giant planets (for example, Cohen & Stewart, 2002). Notwithstanding, we have at present a single example of a habitable planet, namely our own, hence it is bodies in the size range of the terrestrial planets that are of most interest in planetary habitability studies.

The photometric study of CM Draconis has had sufficient sensitivity to detect a range of objects significantly smaller than the Solar System ice giants Uranus and Neptune. Be that as it may, their sizes are even so more appropriate for ice giants than for true terrestrial planets. It has long been understood that progressive gravitational compression of planetary interiors with increasing mass would mean that planetary masses increase rapidly with increasing radii. For example, in the model used by Dole (1964), a 4.0 MÅ  planet with a composition appropriate for the terrestrial planets would have dimensions of only ~ 1.4 RÅ. Mass-radii relationships for planets of a range of compositions were explored by Seager et al. (2007), who arrived at a quantitatively similar results for bodies of Earth-like composition. In their model, a planet of Earth-like composition and 2.0 RÅ  would have a mass ~ 14 MÅ, comparable to Uranus. A 3.0 RÅ planet of Earth-like composition would have to have a mass of > 102 MÅ!

Bodies of ≥ 2.5 RÅ with realistic compositions would probably have a substantial icy component, and would lie in the transition region between terrestrials and ice giants, which is not represented in the Solar System (unless, say, there are relatively massive undiscovered objects beyond the Sun’s Kuiper Belt). It would be fair to say that the transit methodology applied by Doyle and co-workers has approached the detection of terrestrial planets, but has yet to explore the critical domain for super-Earths, let alone Earth-sized bodies.

By establishing constraints upon possible bodies in the CM Draconis system, the observation programme conducted with the Crossley telescope has opened a window into an environment which has undergone a very different history to that of the Solar System, and into another subsystem of the Galaxy.

It is essential to stress that this type of observation programme is not simply about finding planets. Finding planets is exciting, but it is no less important to ascertain astronomical situations in which planets do not exist. This information, together with information about where planets actually may be found will enable astronomers and planetary scientists to explore mechanisms of planetary system formation around particular types of stars, to better understand the dynamics of planetary systems, and to begin to piece together the history of planet formation in our Galaxy. These tasks are vital if we are to place the Earth as a habitable planet in its true perspective, and to recognise those circumstances in which the formation of other habitable planets will be favoured.