Kepler-16: the Discovery of a Transiting Circumbinary Planet 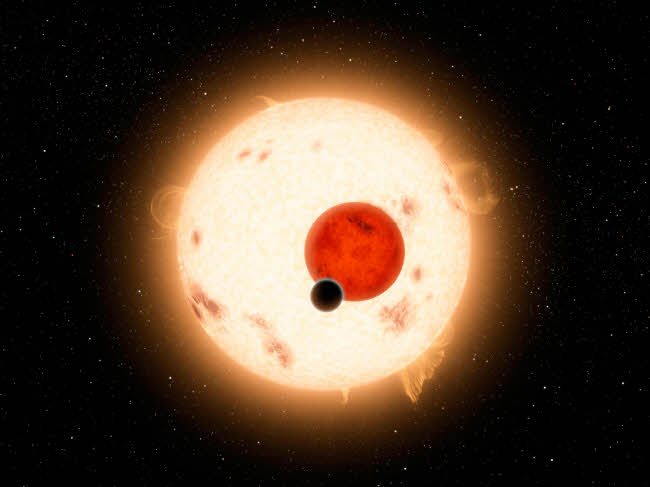 Abstract
We report the detection of a planet whose orbit surrounds a pair of low-mass stars. Data from the Kepler spacecraft reveal transits of the planet across both stars, in addition to the mutual eclipses of the stars, giving precise constraints on the absolute dimensions of all three bodies. The planet is comparable to Saturn in mass and size, and is on a nearly circular 229-day orbit around its two parent stars. The eclipsing stars are 20% and 69% as massive as the sun, and have an eccentric 41-day orbit. The motions of all three bodies are confined to within 0.5° of a single plane, suggesting that the planet formed within a circumbinary disk.

A planet with two suns is a familiar concept from science fiction. However, the evidence for the existence of circumbinary planets—those that orbit around both members of a stellar binary—has been limited. A few good cases have been made for circumbinary planets based upon timing of stellar eclipses (see, e.g., refs. 1-3), but in no previous case have astronomers obtained direct evidence of a circumbinary planet by observing a planetary transit (a miniature eclipse as the planet passes directly in front of a star). Detection of a transit greatly enhances confidence in the reality of the planet, and provides unusually precise knowledge of its mass, radius, and orbital parameters (4).

Here we present the detection of a transiting circumbinary planet around a binary star system based on photometric data from the NASA Kepler spacecraft. Kepler is a 0.95m space telescope that monitors the optical brightness of about 155,000 stars within a field encompassing 105 square degrees in the constellations Cygnus and Lyra (5-8).

Star number 12644769 from the Kepler Input Catalog was identified as an eclipsing binary with a 41-day period, from the detection of its mutual eclipses (9). Eclipses occur because the orbital plane of the stars is oriented nearly edge-on as viewed from Earth. During primary eclipses the larger star, denoted “A”, is partially eclipsed by the smaller star “B”, and the system flux declines by about 13%. During secondary eclipses B is completely occulted by A, and the resulting drop in flux is only about 1.6% because B is relatively small and has a lower surface brightness (Figure 1).

This target drew further attention when three additional drops in brightness were detected outside of the primary and secondary eclipses, separated by intervals of 230.3 and 221.5 days (10). These tertiary eclipses could not be attributed to the stars alone, and indicated the presence of a third body. The differing intervals between the tertiary eclipses are simply explained if the third body is in a circumbinary orbit, because stars A and B would be in different positions in their mutual orbit each time the third body moved in front of them (11, 12). In contrast, there would be no ready explanation for the shifting times of the tertiary eclipses if they were produced by a background star system or some other unrelated event.

Because the third body covers only 1.7% of the area of star A, which was determined to be smaller than the Sun based on its broad band colors (10), the circumbinary body was suspected to be either a planet, or a third star with grazing eclipses. Decisive evidence that it is a planet came from investigation of the timing of the stellar eclipses. The primary and secondary eclipse times were found to depart from strict periodicity by deviations of order one minute. A third body causes timing variations in two ways. Firstly there is a light traveltime effect: the third body induces a periodic motion of the center of mass of the stellar binary, causing periodic variations in the time required for the eclipse signals to reach the Earth (13, 14). Secondly there is a dynamical effect: the gravitational attraction of each star to the third body varies with time due to the changing positions of all three bodies, causing perturbations in the stars’ orbital parameters and therefore in the eclipse times (15, 16). Both effects depend on the mass of the third body. Therefore we could constrain the mass of the third body by fitting the eclipse data with a numerical model of three-body gravitational interactions. This model, described below in detail, showed that the third body must be less massive than Jupiter.

Hence, based on the depth of the tertiary eclipses, and on the magnitude of the eclipse timing variations, the third body was shown to be a transiting circumbinary planet.

The model was based on the premise that the three bodies move under the influence of mutual Newtonian gravitational forces. For this purpose we modified the computer code that was used to model the triple star system KOI-126 (17, SOM). The leading-order relativistic correction to the force law was included, although it proved to be unimportant. The bodies’ positions were calculated with a Bulirsch-Stoer algorithm and corrected for the finite propagation speed of light across the system before comparing to the data. The loss of light due to eclipses was calculated by assuming the disks of stars A and B to be circular, with a quadratic law describing the decline in intensity toward the limb (18). We also allowed for an additional time-independent source of light to account for any possible background stars within the Kepler photometric aperture. In practice this parameter was found to be consistent with zero, and bounded to be less than 1.3% of the total light of the system (19).

We fitted all of the photometric data within 6 hours of any eclipse or transit. Before fitting, a linear trend was removed from each segment, to correct for the slow starspot-induced variations evident in Figure 1. A successful model had to be compatible with the timings, durations, and depths of the primary and secondary stellar eclipses, as well as the transits of the planet across both stars. The model also had to account for the slight
departures from strict periodicity of the stellar eclipses. Furthermore, to pin down the stellar masses and provide an absolute distance scale, we undertook spectroscopic observations to track the radial velocity variations of star A (Figure 2, top panel).

The model parameters were adjusted to fit the photometric and radial-velocity data (Table 1). Figures 1 and 2 show the very good match that was achieved between the model and the data. Uncertainties in the parameters were determined with a Differential Evolution Markov Chain Monte Carlo simulation (21, SOM).

Due to the presence of uniquely three-body effects (namely, the shifts in eclipse times and transit durations), the masses, radii, and orbital distances of this system are well determined in absolute units, and not just in relative units. The eclipse timing variations are dominated by the effects of dynamical perturbations, with light-time variations contributing only at the level of one second. The third body’s dimensions are well within the planetary regime, with a mass of 0.333 ± 0.016 and a radius of 0.7538 ± 0.0025 those of Jupiter. Following the convention of Ref. 22, we can denote the third body Kepler-16 (AB)-b, or simply “b” when there is no ambiguity.

Considering its bulk properties, the planet is reminiscent of Saturn but with a higher mean density (0.964 g cm–3, compared to the Saturnian density of 0.687 g cm–3). This suggests a greater degree of enrichment by heavy elements. With a mass and radius one can begin to model a planet’s interior structure, which will depend on age because planets cool and contract with time. Usually the stellar age is used as a proxy for the planetary age, but in this case the stellar age is not unambiguous. The primary star is a slow rotator (with a period of about 35.1 days, judging from the out-of-eclipse variations), usually indicative of old age. In contrast, the level of starspot activity and chromospheric emission (Mt. Wilson S value = 1.10) are indicative of youth. The spectroscopic determination of star A’s heavy-element fraction ([m/H] = –0.3 ± 0.2) is also relatively uncertain, making it more difficult to estimate the age with theoretical evolutionary models. Nevertheless, for any age greater than 0.5 Gyr, the planet’s interior would include 40-60 Earth masses of heavy elements according to standard planetary models (23). This would imply a composition of approximately half gas (hydrogen and helium) and half heavy elements (presumably ice and rock). Saturn, by contrast, is at least two-thirds gas by mass (24).

To investigate the long-term (secular) changes in the orbital parameters, and check on the system’s stability, we integrated the best-fitting model forward in time by two million years. Within the context of our gravitational three-body model, secular variations occur on a timescale of about 40 years, without any significant excursions in orbital distance that would have led to instability. The planet’s orbital eccentricity reaches a maximum of about 0.09. Likewise, the planet’s line-of-sight orbital inclination changes by 0.2°, which is large enough that transits are only visible from Earth about 40% of the time (averaged over centuries). In particular, the planetary transits across star A should cease in early 2018, and return some time around 2042. The planetary transits across star B are already grazing, and are predicted to disappear for 35 years beginning in May 2014.

The planet experiences swings in insolation due to the motion of the stars on short timescales, and due to secular changes in the planet’s orbit on long timescales. These variations are likely to affect the temperature and structure of the planet’s atmosphere. The planet’s current equilibrium temperature, averaged over several orbits, is between 170 and 200 K, assuming isotropic re-radiation of the stellar flux and a Bond albedo between 0.2-0.5 (in the neighborhood of Saturn’s value of 0.34). Orbital motion of the stars and the planet are expected to produce seasonal temperature variations of around 30 K.

The planetary orbit is aligned with the stellar orbit to within 0.4°. This extreme coplanarity suggests that the planet was formed along with the stars, within a circumbinary protoplanetary disk, as opposed to being captured from another system. Planetesimal formation around an eccentric binary is a theoretical challenge, because of the large collision velocities of particles that are stirred by the stellar binary (25), although the detection of debris disks around close binaries has been interpreted as dust produced by colliding planetesimals (26). Subsequent stages of planet formation around binaries has been studied theoretically, both for terrestrial planets (27) and gas giants (28), but these and other theoretical studies (29) have lacked a well-specified circumbinary planetary system that could allow such a refinement of models.

Finally, the stars themselves are worthy of attention, independently of the planet. It is rare to measure the masses and radii of such small stars with such high precision, using geometrical and dynamical methods independent of stellar evolutionary models. In particular, Star B, with only 20% the mass of the Sun, is the smallest main-sequence star for which such precise mass and radius data are available (30). The mass ratio of 0.29 is also among the smallest known for binaries involving fully convective stars at the low-mass end of the main sequence (29). With well-characterized low-mass stars, in addition to a transiting circumbinary planet, this makes Kepler-16 a treasure for both exoplanetary and stellar astrophysical investigations.

The full report is here:

the Discovery of Kepler-16: a transiting circumbinary planet