An Introduction to our Work

The search for habitable planets is one of the great scientific adventures of the 21st Century. As observational technology has advanced, educated conjecture is being reinforced by empirical data and the subject has acquired increasing respectability and relevance. Today, investigations of planetary habitability are recognised as a cutting-edge science.

The turn of the Century saw the appearance of peer-reviewed journals dedicated to the subject (notably Astrobiology, 2001; The International Journal of Astrobiology, 2002). Today there is a rapidly expanding literature on planetary habitability.

The Ecospheres Project explores the astronomical and planetary context of “habitability,” with an emphasis on characterising “Earth-like” planets and upon global-scale ecosystems (ecospheres in the parlance of ecologists).

This research programme emerged as a long-term legacy of the First International Conference on Circumstellar Habitable Zones (1994), which was convened by one of us (Laurance R. Doyle) at the NASA Ames Research Center, Mountain View, California.

Martin Heath initiated an approach to assessing habitability which uses the ability of a planet to support forests like those on our own planet as a yardstick.  Earth’s forests are of key interest because they contain the largest concentrations of  biomass and biodiversity at the Earth’s surface.  This doesn’t mean, of course, that all life elsewhere has to be exactly the same as life on our planet (which has evolved to exploit Earth’s environments). However,  forest-habitability provides us with a useful conceptual thermometer when we come to ask how “Earth-like” a planet might be. It also  gives us pointers to the kind of evolutionary adaptations changes that would be needed if life were to be able to adjust to different kinds of environments.

Laurance Doyle was a key player in the historical first search for a planet using the transit method. If, thanks to chance, the orbit of a planet around its star is  edge on as seen from the Earth, we can detect the presence of the planet by measuring tiny dips in the brightness of the parent star that will occur once every orbit. The “transit” is the passage of the planet across the disk of its parent star. Except in the case of the closest or largest stars (and using specially devised instruments) cannot see the disks of the stars or their planets, merely very small dips in brightness as the planet crosses).

A drawback with this method is that if the planes of planetary orbits around their stars are aligned at random, then only 0.47% of all systems will be lined up to give us a transit.

Astronomers would have to check out large numbers of stars before they could strike it lucky.

The star selected by Doyle and his co-workers was CM Draconis, a binary star, which consists of two red dwarf suns that orbit close together around their common center of gravity. One of the main  reasons why CM Draconis was chosen was because its two suns eclipse each other as seen from Earth – their mutual orbit is aligned edge on to us. Astronomers believe that the only stable planetary orbits close to a binary system would be those that lay in the same plane as the stars. So, if we can see the stars eclipsing each other, there’s a good chance that we would also be set up just right for planetary transits, with a planet passing across the disk of each star in turn.

Although no planets were definitely confirmed around CM Drac, Laurance Doyle is a participating scientist on NASA’s planet-hunting Kepler mission, which has involved a spacecraft that can scan vast numbers of stars simultaneously, looking for transits. He led the team that discovered Kepler-16b, the first confirmed Kepler object to be orbiting around two stars (an orange dwarf and a smaller cooler red dwarf).

The discovery (backed by a 49-author paper) was announced at a NASA press conference on September 15, 2011.

Kepler-16b is huge, comparable in size and mass to the Solar System gas giant Saturn, and not itself a suitable home for Earth-type life.

However, Heath, with Doyle as supporting author, quickly flagged it up as the historic first confirmed Kepler object to be of potential interest to astrobiologists. All the previous objects had been scorchingly hot, but Kepler-16b sat rather outside the classical Habitable Zone and, in principle, it could have moons which might support life, if not actually on their surfaces, then below them. This doesn’t require moons as large as the Earth, because any residual geological activity (perhaps kept going by tidal forces) with films of liquid water and  fresh mineral surfaces to provide vital nutrients, could keep ecospheres with bacterial-grade life-forms ticking over.

Below: Kepler 16b – the first planet from the Kepler mission to be of interest to astrobiologists  was discovered by a team led by Laurance Doyle. 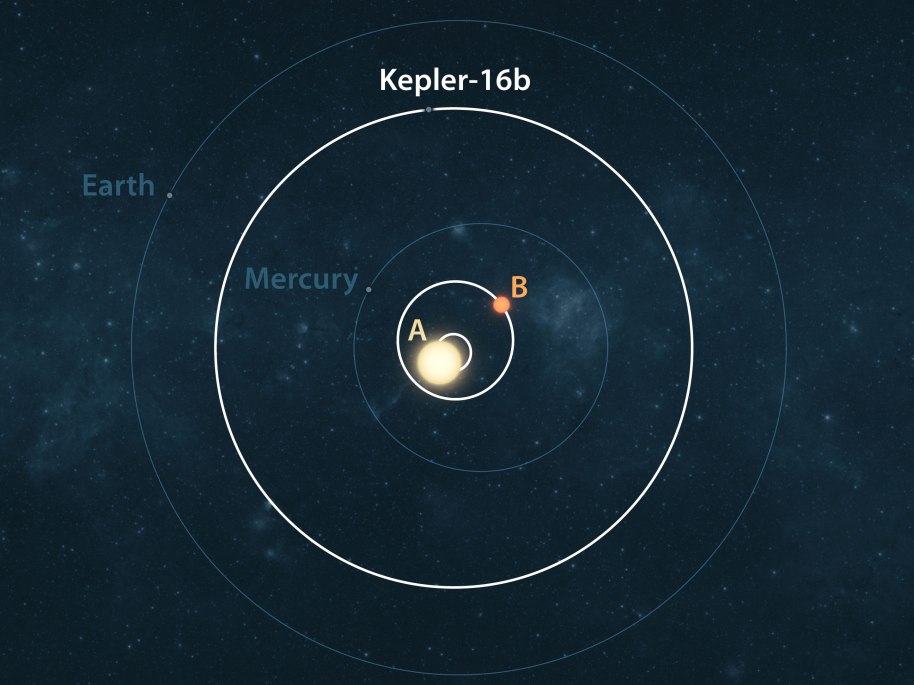 A note on CM Draconis

CM Draconis is a binary, two stars which orbit around a common centre of gravity.

Let us imagine that we are standing on Earth looking at a star. A planet closer to the star will orbit faster and with a shorter period, so we will see more frequent transits. A larger planet will produce a deeper dip in brightness than a smaller planet. Also, if  a planet is orbiting a close binary,  we will see more planetary transits because it can transit two stars and not just one.  Astronomers measure the dimming that betrays a transit in progress using a photometer.  Laurance Doyle  and co. made hundreds of thousands of measurements  of CM Drac using the Crossley telescope at the Lick Observatory,  California.

As our research continues, this website will provide access to reports published directly from the Ecospheres Project and to peer-reviewed papers arising from our work.