In 1994, Laurance Doyle and co-workers launched the first project capable in principle of detecting or eliminating the presence of planets close to the general size range of the Earth in orbit about another main sequence star. It was also the first planet hunting effort to employ the transit method.

The observation programme has been conducted at the Lick Observatory, set on Mount Hamilton in the Diablo Range, part of the California Coast Ranges. This historic facility was established in the late 19th Century by the wealthy businessman James Lick (1796-1876), who wanted to leave as his legacy the discovery of life on the Moon, and from the late 20th Century, it has played a leading role in the the hunt for planets of other stars. Geoff Marcy and his colleagues at the University of California have been particularly active and successful in this effort. 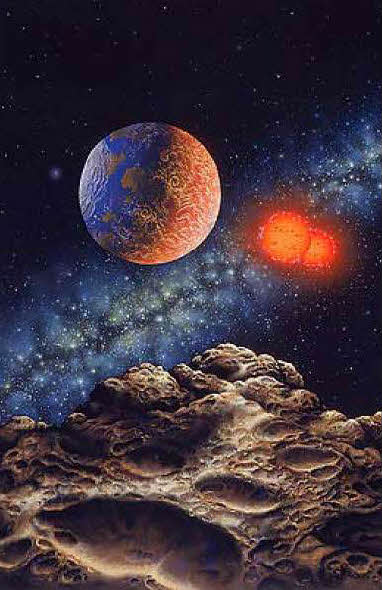 Above: A motif of the CM Draconis system devised by artist Lynette Cook. It illustrates the Milky Way (stars, gas and dust concentrated into the plane of our Galaxy), the red dwarf binary, a hypothetical Earthsized planet in synchronous lock, a white dwarf member of the system (out at ~ 400 AU), depicted here on the far side of the planet, seen from a view-point on a heavily cratered asteroidal body (also hypothetical). More work by Lynette Cook may be found at extrasolar space art

The observation programme concentrated on a single system, namely the binary red dwarf CM Draconis. The methodology had a sensitivity comparable to that of the California and Carnegie Automated Planet Finder facility, which was installed more recently (2007), and which was designed for the specific purpose of detecting extra-solar planets. There were cogent reasons to select CM Draconis for attention. The star is a close binary, which undergoes regular eclipses as seen from the Earth. This means that the mutual orbit of the stars around their common centre of gravity, is tilted essentially edge-on to us. It was then thought that stable planetary orbits close to the primary would be constrained to lie in the same plane as the binary orbit, so that if planets are present, they should transit both starsat regular intervals. The Habitable Zone would be close to the star, so orbital periods of potentially habitable planets would be frequent (Schneider & Doyle, 1995). Because these two stars are very close to one another, double transits, when a planet passes in front of both stars in turn, will also be frequent. This would enhance considerably the chances of detecting any planets which might be orbiting within the classic HZ.

Additionally, CM Drac is notable for being one of the lowest mass eclipsing binaries known. this means that massive planets should manifest themselves through their perturbations on the two stars, which will change the timing of the eclipses. It should be noted that there is also a distant white dwarf stellar remnant, in the system, but it must lie at least 380 AU from the binary (separation at periastron has yet to be determined and could be significantly smaller than this). Its presence does not interfere with the transit methodology, but must have had a major influence on the environmental history of the system, particularly as it passed through its red giant phase and finally ejected its outer layers as a planetary nebula, which will have enveloped the binary and any planets which it might possess. There have been several studies of the CM Draconis system, and astronomers have achieved relatively accurate estimates of the sizes of the masses, radii and luminosities of the two eclipsing red dwarf stars (quoted here in terms of solar values: M; R; L). The distance of the system was derived by Lacy (1977) from existing parallax measurements, which he considered best represented by a value of 0.069 ± 0.005 arc sec, corresponding to 47.2 light years. He published effective photospheric temperatures (Teff) for both stars of 3150 ± 100 K, and assigned them to spectral class of M4.5. In their discussion of the evolution of Very Low Mass stars, Chabrier & Baraffe (1995) considered CM Draconis to be an old disc (= thick disc) Population II star, whose components had an effective photospheric temperature of 3,320 K or 3,360 K. They adopted a distance of 51.9 light years.

One of the most important factors relating to the ability of a thick disc star such as CM Draconis to have formed planets is its metallicity (colleagues in other fields should note that in astronomical parlance a metal is any element heavier than H and He, regardless of its chemical properties or position in the peridoic table). Amongst solar type stars, a relationship appears to exist between metallicity and the ability to form planets. It is not unreasonable to anticipate that the same general principle applies to stars in other mass ranges. The lowest metallicity for a star (HD 6434) known to possess a planet (see discussion in Santos et al., 2003) is [Fe/H] (log iron/hydrogen) = -0.52 ± 0.08 (0.30 solar value). Fischer et al. (2004) discussed metallicity-dependence of planet formation, noting that only a few percent of stars around [Fe/H] = -0.50 possess planets. Laws et al. (2003) found that stars with planets had a mean metallicity of [Fe/H] = +0.12 ± 0.02 (1.32 solar value) as against a value of -0.10 ± 0.03 (0.79 solar value) for stars without planets from Santos, Israelian & Mayor (2001).

Viti et al. (2002) compared their high-resolution infrared spectroscopic observations of six 0.05- μm-wide regions between 1.51 and 2.45 μm with synthetic spectra, which had been derived using the stellar atmosphere code PHOENIX. Spectral data combined with exisiting knowledge, particularly CM Draconis’ well determined surface gravity, were used to derive estimates of metallicity. They reported significant discrepancies between observed and synthetic spectra over most of the spectral region in which they observed and this emphasized the need for higher quality IR atomic data. They considered, however, that the Δν=2 CO bands beyond 2.3 μm were well modelled and metal-sensitive, and indicated a metallicity of around -1 dex for CM Dra (0.1 solar), which supported previous results from infrared studies, but disagreed with standard evolutionary models or optical analyses, which had suggested a metallicity similar to the solar value.

The kinematics of CM Drac relative to the Sun for components of motion away from the galactic centre, in the galactic plane in the direction of galactic rotation, and perpendicular to the plane are respectively U = -106.8 km s-1, V = -119.8 km s-1 and W = -35.1 km s-1. Morales et al. 2008, p. 14): “These values indicate that the system probably does not belong to the thin disk population. No clear correlation between kinematics and metallicity or age has been found for stars on the solar neighbourhood (Nordström et al. 2004), and certainly no claims can be made on an individual star basis. We must conclude that the kinematics of CM Dra do not seem to stand in contradiction with an age of about 4 Gyr, neither help to discern between a solar or moderately sub-solar metallicity.”

The mutual orbit of the two stars has a very low eccentricity (Morales et al., 2008 quoted a representative figure of 0.0054) and there is an evident precession of the line of the apsides. Its value is not well established, but an apparent discrepancy between observation and the predictions of general relativity and tidal theory is consistent, in their opinion, with the presence of a sub-stellar body in the system.